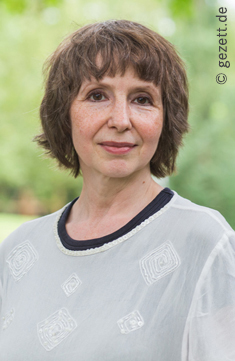 Sylvia Geist, born in 1963 in Berlin, has published poetry and prose. In addition, she has translated poems by John Ashbery, Peter Gizzi and Chiricure Chirikure, among others. Her work has received several awards, including the Meran Poetry Prize (2002) and the Adolf Mejstrik Honorary Award of the German Schiller Foundation (2008). Hanser Berlin most recently published her poetry volume Gordisches Paradies (2014), for which she received the ver.di Literary Prize.

An impressive, hard-hitting debut that ...

These poems enthral the reader with their combination of crystal-clear thought and sensual imagery. Sylvia Geist illuminates the world and, at the same time, touches it with her bare hands. An ...

In her new volume of poetry, Sylvia Geist, whose lyricism has been described as a matchless fusion of surefire scientific assurance and unadulterated poetic instinct verging on the ...