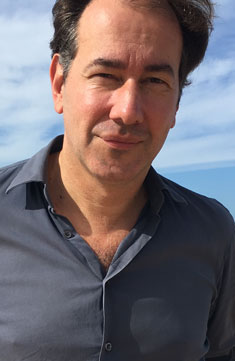 Niklas Maak, born in 1972 in Hamburg, Niklas Maak studied Art History, Philosophy and Architecture in Hamburg with Martin Warnke and Paris with Jacques Derrida. He graduated with a Ph.D in philosophy on Paul Valéry and Le Corbusier, in 1998. Since 2001, he has been the arts and architecture editor at the Frankfurter Allgemeine Zeitung. Besides, he thought architecture in Frankfurt, Nairobi and at Harvard (2014-2020), and was a co-author, and co-curator to Rem Koolhaas‘ research project "Countryside", and the eponymous exhibition at the Guggenheim Museum in New York. He has received numerous awards for his work, among them the George F. Kennan Prize, the Henri-Nannen-Prize and the BDA Prize.Most recently published by Carl Hanser Verlag: Wohnkomplex. Warum wir andere Häuser brauchen (2014), Atlas der seltsamen Häuser und ihrer Bewohner (2016), Durch Manhattan (2017, with Leanne Shapton) and Technophoria (2020). Maak lives in Berlin und Frankfurt.

Our future has already begun. This is a wild, melancholic and enchanting novel covering the big questions of our time.

Turek works for a company that builds 'smart cities'. His boss is ...

An Atlas of Curious Houses

A house towers in front of you: a gigantic, white wooden castle, built by a New York art collector and financial, speculator, who embezzled 700 million dollars. Or a concrete semi-circle built on ...

Very soon we won’t be able to afford houses as we know them, neither ecologically nor economically. Most houses are tailored to the needs of small families, but the single family unit is now ...

Logbook. The (Hi)story in a Car

The author tracks down the names on the registration certificate and is steered into a labyrinth of memories, stories and speculations. The car was driven by a doctor, an Italian immigrant, a ...

Logbook. The (Hi)story in a Car

The author tracks down the names on the registration certificate and is steered into a labyrinth of memories, stories and speculations. The car was driven by a doctor, an Italian immigrant, a ...

The Architect on the Beach

When Le Corbusier's church "Notre-Dame du Haut" was built in the little village of Ronchamp in 1955, it caused quite a stir: did it constitute a "consummate example of the mania for innovation, ...