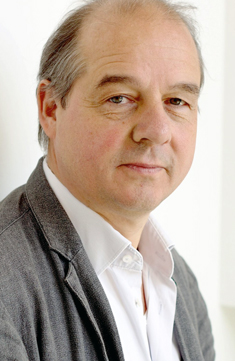 Karl-Heinz Ott was born in 1957 in Ehingen an der Donau, and has received numerous prizes for his writing, including the Friedrich Hölderlin Emerging Writers Prize (1999), the Alemannic Literature Prize (2005), the LiteraTour Nord Prize (2006), the Johann Peter Hebel Prize (2012), the Wolfgang Koeppen Prize (2014) and the Joseph Breitbach Prize (2021). His most recent publications with Hanser were the novel Und jeden Morgen das Meer (2018) and the essay Hölderlins Geister (2019).

Lack of trust in democracy, radicalisation, authoritarian forms of government - has the Enlightenment failed to achieve its goals?

A madman? A revolutionary? A Swabian idyllic writer? A national war hero? Or the pioneer of modern poetry? Friedrich Hölderlin, the man in the tower, is more hotly disputed than any other German ...

And Every Morning, the Sea

Sonja has been the manageress of a hotel on Lake Constance for 30 years; her husband Bruno is its award-winning chef. But now she’s looking down from the cliffs near Abydyr, a remote Welsh ...

Father is lying in state. With his death, the last thread linking the four siblings is severed. But before they inform anyone, the inheritance has to be divided up – provided of course that ...