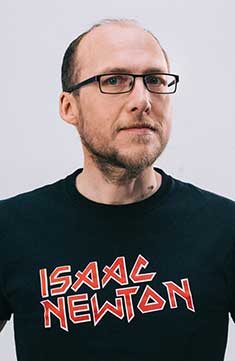 Florian Freistetter, born in 1977, studied astronomy at the University of Vienna. In 2008 he launched the astronomy blog "Astrodicticum simplex", one of the most widely read science blogs in German. His podcast "Sternengeschichten" (Star Stories) is one of the most successful German-language science podcasts. Hanser has published his books Der Komet im Cocktailglas (2013), which was awarded the "Science Book of the year Prize" in 2014, and most recently, Hawking in der Nuss-schale. Der Kosmos des großen Physikers (2018) and Eine Geschichte des Universums in 100 Sternen (2019). In 2015 he became a permanent member of the Science Busters show. florian-freistetter.de, scienceblogs.de/astrodicticum-simplex, on Facebook and Twitter

A History of the World in 100 Microorganisms

They are everywhere, mostly invisible, and they make the world go round – bacteria, viruses, algae and fungi. How did an inconspicuous bacterium introduce the feast of Corpus Christi to ...

A History of the Universe in 100 Stars

From mythology to science fiction, and the Star of Bethlehem to the Gaia mission, Florian Freistetter tells the history of the universe in 100 stars. And in 100 entertaining chapters, he not only ...

Hawking in a Nutshell

Few writers have sparked such worldwide interest in astronomy and physics as Stephen Hawking. At the same time, however, he wrote about such complex issues that only a handful readers can claim ...

Why Do Asteroids Always Land in Craters?

Those who know nothing have to believe everything – an informative polemic Can dragons breathe fire? Is the body of Christ gluten free? Can you arrive too late in a black hole? What do viruses ...

Isaac Newton, egomaniac, and genius - a biography like never before.
more

Picture this scary scenario: asteroid XYZ is racing toward the earth and threatens to wipe out all life. Only a few short weeks remain to divert disaster. At the last possible moment a team of ...

The Rediscovery of the Sky