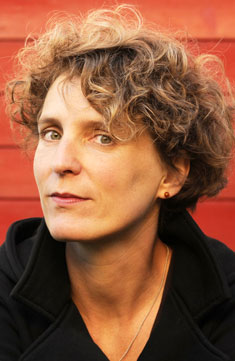 Annette Pehnt was born in Cologne in 1967. She studied and worked in Ireland, Scotland, Australia and the United States. A writer, critic and literary scholar, she lives with her family in Freiburg. Her many awards include the Italo Svevo Prize, the Solothurn Literature Prize, and the Hermann Hesse Prize for Literature. Hanser previously published Der Bärbeiß in 2013 and Der Bärbeiß – Herrlich miese Tage in 2014.

Every preschooler likes counting, coloring, solving riddles, and finding mistakes. With this book Jutta Bauer invites her youngest readers to take a really close look at her wonderful ...

Grumpy Bear is in the most awful mood you could ever imagine. But then he falls in love – and, magically, can’t help but smile.

Standing Up for Anuka

Every year Philip spends his holidays in the PalmClub Hotel. It’s wonderfully easy-going there – and he gets to see Anuka again! But this time something unexpected happens: the quiet and ...

Will spring improve his mood? Will there be high spirits the summer? Will he manage to have some fun in the autumn? Will he go sledging in the winter? The Grumpy Bear prefers to spend his time ...

The Grumpy Bear doesn’t like having visitors and he doesn’t want to visit anyone either. But the friendly creatures in his neighbourhood don’t let that put them off. So we’ll just keep on ...